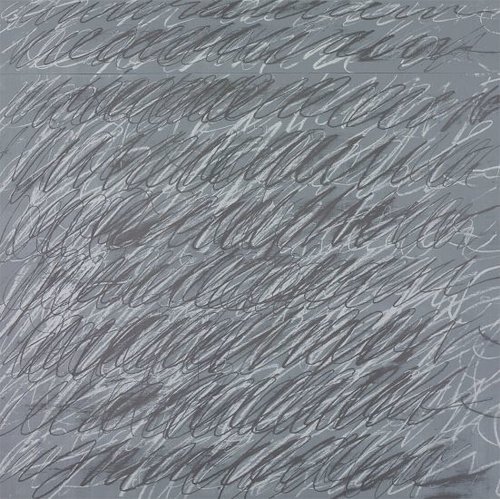 Cy Twombly emerged in the mid-1950s alongside New York artists Jasper Johns and Robert Rauschenberg. While at first developing a graffiti-like style influenced by Abstract Expressionist automatism–having notably studied under Franz Kline and Robert Motherwell at the legendary Black Mountain College between 1951 and 1952–Twombly was a prominent figure in the new generation of artists that challenged the abstract orthodoxy of the New York School. Twombly developed a highly unique pictorial language that found its purest expression upon his life-defining move to Rome in 1957. Simultaneously invoking classical history, poetry, mythology and his own contemporary lived experience, Twombly’s visual idiom is distinguished by a remarkable vocabulary of signs and marks and the fusion of word and text.

Cy Twombly produced graffiti-like paintings that were inspired by the work of Willem de Kooning, Jackson Pollock and Robert Motherwell. His gestural forms of lines, drips and splattering were at first not well-received, but the artist later became known as the leader of the estrangement from the Abstract Expressionism movement. Full of energy and rawness, Twombly’s pieces are reminiscent of childhood sketches and reveal his inspiration from mythology and poetry.