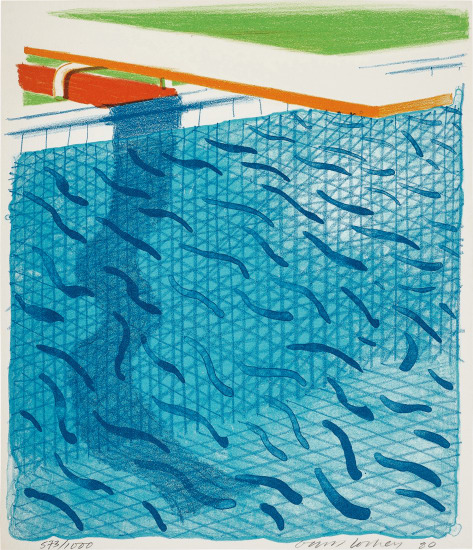 A pioneer of the British Pop Art movement in the early 1960s alongside Richard Hamilton, David Hockney gained recognition for his semi-abstract paintings on the theme of homosexual love before it was decriminalized in England in 1967. In We Two Boys Clinging Together (1961), red-painted couples embrace one other while floating amidst fragments from a Walt Whitman poem. After moving to California at the end of 1963, Hockney began painting scenes of the sensual and uninhibited life of athletic young men, depicting swimming pools, palm trees, and perpetual sunshine. Experimenting with photography in the mid-1970s, Hockney went on to create his famous photocollages with Polaroids and snapshot prints arranged in a grid formation, pushing the two-dimensionality of photography to the limit, fragmenting the monocular vision of the camera and activating the viewer in the process. A versatile artist, Hockney has produced work in almost every medium—including full-scale opera set designs, prints, and drawings using cutting-edge technology such as fax machines, laser photocopiers, computers, and even iPhones and iPads.