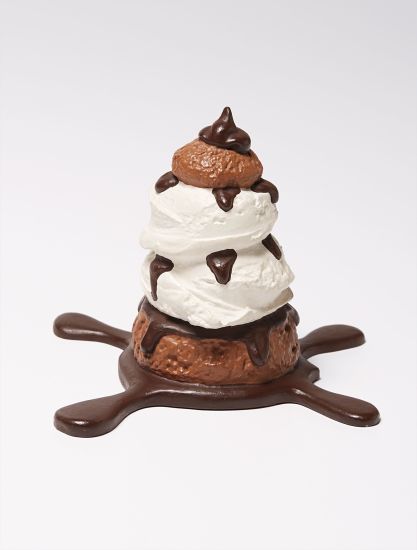 “I am for an art that is political-erotical-mystical, that does something more than sit on its ass in a museum,” wrote Claes Oldenburg in his seminal 1961 manifesto I Am For An Art. From his Happenings beginning in the 1960s, to his enormous public sculptures of ice cream and rubber stamps, to his collaboration with his wife Coosje van Bruggen, Oldenburg has remained at the forefront of the Conceptual and Pop Art movements. He has worked in a variety of mediums including performance, drawing, and writing, though he is best known for his large glossy or soft sculptures of ordinary consumer items, such as Lipstick (Ascending) on Caterpillar Tracks (1969-74). Some of Oldenburg’s most radical works remain in the realm of concept, as in his proposal for Thames Ball (1967)—a giant toilet tank ball that would have floated on the Thames River. “I am for an art that grows up not knowing it is art at all,” he wrote. “I am for an artist who vanishes.”