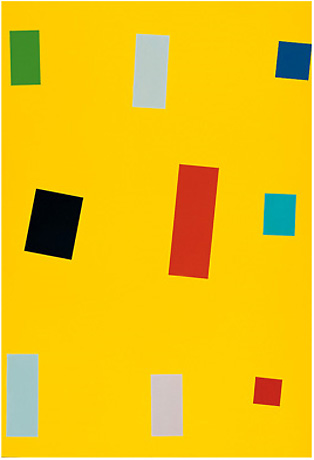 Imi Knoebel is a German painter and sculptor known for his contributions to and shaping of 20th century Minimalist abstract art. Often working with large-scale modular shapes, Knoebel’s work is regarded as an ongoing, elliptical investigation into formalism and the medium of painting itself. Born in Dessau, Germany in 1930, he went on to study at the Darmstadt School of Arts and Crafts and then the famed Kunstakademie Düsseldorf, where he befriended Joseph Beuys and Blinky Palermo. Though his early work was often monochromatic, Knoebel became interested in the teachings of renowned colorist Johannes Itten, and much of his later work is characterized by its bright palette and strong color relationships. One of his best-known pieces, 24 Colors for Blinky (1977)—made in memoriam of his friend’s untimely death—consists of a irregularly shaped panels each painted in a specific, memorable hue, and is featured in the permanent collection of Dia:Beacon in upstate New York. Knoebel has been the subject of solo exhibitions at such institutions as the Haus der Kunst in Munich, the Stedelijk Museum in Amsterdam, and the Hamburger Bahnhof in Berlin. He lives and works in Düsseldorf, Germany.
BACK TO ARTISTS