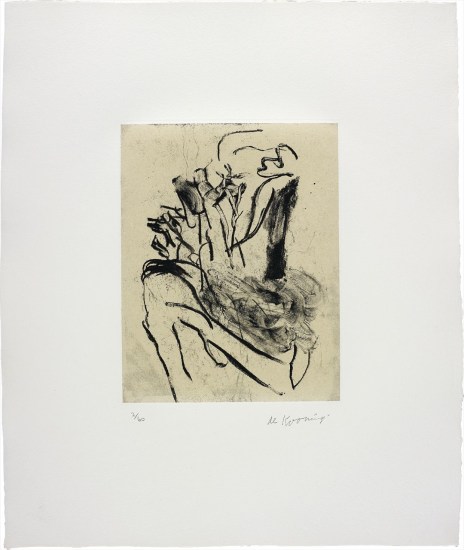 Willem de Kooning was a renowned American-Dutch painter that helped form the Abstract Expressionist movement. His gestural works—which were loosely based on figures, landscapes, and still lifes—helped establish a distinctly American style of painting. Perhaps De Kooning’s most famous series were his Woman paintings, inspired in part by Pablo Picasso’s work, they featured a wholly original approach to deconstructing the figure. “I don’t paint with ideas of art in mind. I see something that excites me. It becomes my content,” the artist once explained. Born on April 24, 1904 in Rotterdam, Netherlands, De Kooning went on to study art in his hometown before traveling to the United States as a stowaway in 1926. He first lived in Hoboken, NJ, where he worked as a house painter and carpenter before settling in New York in 1927. In New York, he made a living as a commercial artist for window displays and fashion ads. A major turning point in his career was meeting Arshile Gorky, whose influence and friendship helped solidify De Kooning’s maturation as an artist in the 1930s. The artist’s wife Elaine de Kooning went on to become a notable painter in her own right. By the mid-1950s, De Kooning had moved away from the figure with works like Interchange (1955), which more closely resembled a landscape. Though the artist had fallen from the spotlight by the late 1960s, he continued to create distinctive works, living out on a farmhouse in Long Island. De Kooning died on March 19, 1997 in East Hampton, NY. Today, his works are held in the collections of The Museum of Modern Art in New York, the Art Institute of Chicago, the Tate Gallery in London, and the Kunstmuseum Basel, among others.
BACK TO ARTISTS