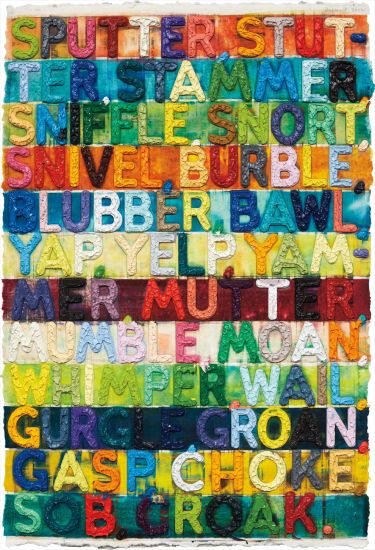 Mel Bochner’s approach and materials constantly vary; in fact, the artist formally disavowed allegiance to a single material in his famous essay titled “the Medium and the Tedium” (2010). Bochner—who has produced paintings, installations, and photography—is noted to be one of the most influential pioneers of Conceptual art, and the organizer of the first Conceptual art exhibition in 1966. A recurring theme in Bochner’s work is the relationship between language and physical space or color. This is famously demonstrated in his “Measurement” installations of the late 1960s, visualizing the exact dimensions of rooms and exhibition spaces, and thesaurus-inspired paintings of a single word and its synonyms. Bochner formally studied under Douglas Wilson and Wilfred Readio, though his eventual style would draw strong influence from the works of Clyfford Still and Jean Dubuffet.